@PCSTech says – Where preaching is happening, it’s directed at the choir. #iste11 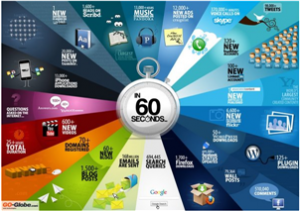 My first session at ISTE 2011 was with Will Richardson.  It was an excellent rallying cry.  A call for us to wake up.  The problem?  The people who really need to hear that message aren’t in the audience.  Will’s talk frightens me.  Why?  Because what he’s describing is simply the current state of technology.  He’s not speaking as a futurist, here.  And, as our learners move forward the relevance gap between school and the real world grows wider and wider.  In an age of automobiles we’re educating them to be buggy whip makers.  I worry about this gap, because, as one colleague said it, “this new landscape of technology is like the Wild West.”  Our kids are rushing in but typically without the guidance and wisdom of adults who are also pioneering ahead.  The result?  Well, just spend some time on XBox Live or look at what the average video posted to YouTube or the dialogue on Facebook.  I want them to share their lives and their creativity in these new media.  They should be.  But, they need guidance from us.

@PCSTech says – The real innovation is not in technology but in thinking. #iste11

I spent enough time in the vendor area to make it from one end to the other.  I am pretty confident in saying that I saw ZERO examples of any tools that were revolutionary.  I didn’t see any gadget, tool, service, or resource that fundamentally shifts instruction.  Every demonstration was instructor-centric.  “Look at what you as the teacher can show your students…”  Interactive white boards are bigger, snazzier, and offer more razzle dazzle than ever before.  Student response systems have only made standardized testing easier.  Like we need it. Some of the technology I saw was downright disgusting, like this tool that allows you to use an iPad 2 to score standardized Scan/Bubble sheets.  Seriously people?

If you are a gamer or a member of the 97% of our student population who plays electronic games, then you know what real games are like.  When you go home, you immerse yourself in the fast-paced action of Call of Duty, conquer dungeons with your guild in World of Warcraft, or get your daily workout while dancing in front of your Kinect.  Educators, please don’t try to sell your “educational” or “serious” game as a game in that light.  It won’t help the cause of advancing games as a viable tool for learning in our learners’ eyes.  When it comes to games in education, there are two areas I think we should pay close attention to:  student-created games like Pat Yongpradit is doing (using tools like Kodu/XNA, GameStar Mechanic, or Game Maker) and the use of commercial, off-the-shelf games (like Civilization, SIMS, or World of Warcraft).

For me, the real meat of the conference came in the conversations between sessions and over meals.  EduBloggerCon was quite possibly the most valuable experience of all.  I think the un-conference format really fosters deep conversation and networking and I’m hoping to adapt the format for professional development in my district.

2 Responses to “Three Things I Didn’t Tweet from #ISTE11”