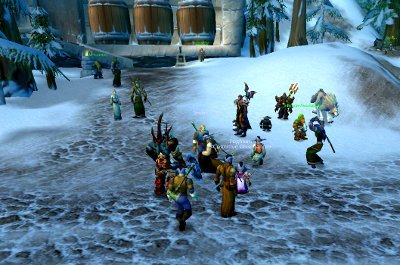 Earlier this week students from Cape Fear Middle School and Suffern Middle School had their first in-game contact with each other.  In some ways it was similar to the kinds of interactions you might expect if you put a random assortment of middle schoolers together at school dance.  There was a  little mingling, a few timid “‘Sup’s?” and a few silly emotes.  Then, they ran off to complete a few more quests before the day was over.  Could this be the beginning of a guild?  Yeah.  I think so. 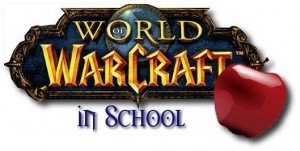 For over nine years now, I’ve been playing MMORPG’s.  It was a student who introduced me to Everquest back in 2000.  Since then, I’ve played primarily with students, former students, and folks from around the world in a guild that I lead called Harbingers of Light.  We’ve progressed through Everquest, Dark Age of Camelot, and World of Warcraft.  It didn’t take long before I was convinced that these sorts of virtual environments must have some sort of place in education.  How many times have I thought, “If I could just use this feature or that, I could easily teach concept X?”  If my students were as motivated about Cell Structure and Function as they were about knowing the intricacies of a fight in Molten Core, they’d all have “A’s.”

As a gamer and a teacher I had a connecting point with many of my students.  Discussing loot or an upcoming raid always gave us something to talk about outside of class and allowed me to develop a rapport with students who often didn’t fit typical high school molds.  My classroom became their hangout during break and lunch.  I was always amazed at how easily they recalled minute trivia about the game world, often quoting specific statistics about a piece of gear or their character’s game statistics.  Their ability to think critically about a particular strategy in a boss fight blew me away.  These were not necessarily honors-level students, either.  Sometimes my poorer-performing students would amaze me with what they knew about the game.

Why couldn’t we use a game like this in a school setting?  Why not, indeed!  What would it look like to have a computer lab full of students all playing World of Warcraft together with their teacher (projected on the screen at front, of course).  I finally took the time to write down many of the ideas that I’d been formulating.  “There are some real lessons to be taught in all of this!”  I shared my ideas with one of the coolest and most forward thinking gamer/educators I’d met at the 2008 Games Learning and Society Conference, Peggy Sheehy.  Peggy’s feedback was very positive and she wanted to share it.

Then I thought, “surely we’re not alone.”  I know there are other World of Warcraft playing teachers out there (I know because I have two from my district in my guild).  So, I migrated the project to a Wiki format because I want others to share and collaborate.  Peggy has recently shared this with the RezEd community, an online community of virtual world enthusiasts and educators. I’ve even found another, avid World of Warcraft teacher in my own state who’s been adding her ideas for World of Warcraft lessons to the wiki.  It’s very exciting to see these ideas gaining traction!

So, what sort of lessons could you learn from World of Warcraft?  There are so many and the collaborative wiki environment is allowing other teacher-gamers to add their own lesson ideas.  Here are some examples that I and other teachers have come up with:

So, how would all of this be implemented?  That’s up to the teacher.  I’m hoping to use this as an after school program targeting at-risk students, but the lessons we’re developing are designed to be very granular and implementation is flexible.  I’m hoping to implement this in the coming school year.  Overall, the project is still in the early formative stages.