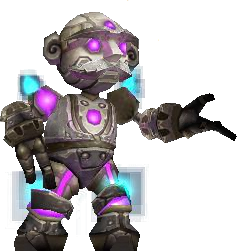 There is a certain thrill for me watching adult learners exploring a totally alien environment.  Maybe it’s the mad scientist in me?  I’m having those very sorts of opportunities in August as Peggy Sheehy and I lead teachers from around the world through quest-based learning experiences in 3DGameLab.  Our group’s quests revolve around the concept of using World of Warcraft (or similar MMO’s) in the classroom.  Our first week has simply been a chance to orient folks to World of Warcraft.  Simply put, we just want them to play the game, immersing themselves in the fantasy world of Azeroth.

As we move into week two, we’re asking our participants to look at the game through the lens of education and instructional design.  World of Warcraft is an incredibly complex game.  This first week has reminded me of just how much I take for granted:  the jargon, game culture, and of course the technical side of things.  We have a range of prior knowledge among our participants from those who have multiple level 85 characters, the highest level in the game, to those who have never experienced any virtual world, much less a game-based virtual world.

One of the first quests for our explorer-teachers this week is to examine how the game’s designers essentially are instructional designers.  The game has to teach you how to play the game.  This requires a great deal of thought, planning, and testing on the part of the designers.   Blizzard Entertainment, the makers of World of Warcraft, have become masters of this, as their subscriber numbers (around 12 million) indicate.

We asked our teachers both newcomers and veterans alike to reflect on their first experiences in the game and to consider what lessons we might apply to our classroom instruction.  The first responses coming in are very telling:

After a couple of unhappy days, something happened that turned it around for me. People started helping me – not only that, but on two different days, very advanced players went on quests with me. What a totally different experience it was! I loved playing. It was so much fun, and I was learning a tremendous amount by following their lead and asking questions. It’s lonely to struggle by yourself, and many times I thought that this must be how students feel when they get stuck and are not allowed to work with anyone else.

This response really highlights the value of the social component, something that good games typically foster but too often our classrooms discourage.  Another teacher shared this observation:

Each quest would expand the area you could investigate. Each quest would introduce you to more and more challenging obstacles to overcome. Some quests taught you how to fish, earn money with a trade, and use different talents. You were not tossed in the middle of the pool with all your skills in place, you had to learn them one or two at a time. New skills built upon previous knowledge.

This mastery-based approach is not common in our schools, primarily because time for learning is a set constant.  The mentality is, “if you don’t get it, sorry, we have to move on.”  Keeping your experiences within your “regime of competence” is a concept also reflected by this educator:

WoW is good at starting you off small – just a few spells, easily defeated baddies, and quests that let you go practice your skills without aggroing mobs. The game is also good at keeping you within your skill realm. You won’t find any level 30 foes in the level 1 areas so you’re usually pretty safe from biting off more than you can chew.

On the concept of feedback to the player (what we might call assessment), one of our educators shared this observation:

I could see that I was making progress, and that was motivating. Also the frequent advancing in levels at the beginning stages. I was so happy when my level went up! I’ve rarely seen this technique done in education, but it could certainly be borrowed.

I was so impressed by the thoughtfulness and reflection of these educators I had to go ahead and share it.  There are many more educators who’ll be sharing their reflections on exploring World of Warcraft this week.

Are you a gaming educator?  What parallels can you make between game design and good instructional design?

During my reading of two articles: “Open Learning Environments” by Hannafin, Land, and Oliver, and “Designing Instruction for Constructivist Learning” by Richard E. Mayer, it occurred to me that a select few computer game designers such as Sid Meier are potentially some of the most effective instructors out there, and perhaps without even meaning to be.

I recall a time during my undergraduate studies, while taking Western Civilization, that I first realized the inherent educational value in some games that I played. Sid Meier, a well-known designer of games for the PC format developed a series called Civilization. At the time I was taking Western Civilization, the sequal to the game, Civilization II, had been released. To give a bit of background, in these games, you begin as one of the world’s great leaders: Julius Ceasar, Gandhi, Genghis Khan, Abraham Lincoln, etc., and you start around 4,000 B.C., having emerged as the leader of a very primitive culture. As you progress through history, your civilization develops new technologies, expands its borders, and ultimately achieves a military, cultural, or even space-race victory, advancing into the information age and beyond. Along the way, certain advancements affect how your civilization grows, what technologies it obtains, and how it interacts with other cultures.

Having played the game for some time, I found that many of the concepts taught in a college-level Western Civilization course were already known to me, and as thought about why, I realized that much of what I’d learned was through a very masterfully-designed computer game: Civilization.

So, how is it, that a computer game, often viewed as a simple amusement can be so educational? Whether intentional or not, Sid Meier succeeded in creating not only a highly entertaining game but a highly educational game as well. I think the educational value stems from some of the very things outlined in this week’s readings on Open Learning Environments (OLEs) and Constructivist Learning.

In a sense, the player in the Civilization series is in an Open Learning Environment. During the course of play, the player (or learner?) is faced with a number of problems. These problems stem from goals specified in game to those that evolve specific to the player’s actions as the game progresses through history. The complexity of the game lends itself to infinite number of outcomes both at a large-scale and small-scale level. For example, a player may realize that one of his cities is in revolt with numerous unhappy citizens. This is a problem because due to a war with China, this city is needed for military production. The player then must determine what is causing the unrest within this city. Is because of lack of entertainment? Is it due to the cultural influence of a neighboring civilization? Could it be the result of poor sanitation? The possibilities are numerous. At this point the player can begin to experiment (”play with” variables) if the cause of the problem isn’t clear.

Tools are provided to the player in the form of advisors. If the program senses that your civilzation’s scientific advancement is slowing, your science advisor may request a meeting with you and suggest steps to avoid a declining science program. However, your military advisor may disagree and suggest that switching funding from military to science will cause a defense problem. In a sense, these built-in advisors also provide some level of scaffolding by giving hints, suggesting a series of steps to take to solve a problem, or even by reminding you that your intent was to conquer China.

Sid Meier’s design also includes elements described in Richard Mayer’s work on “Designing Constructivist Learning.” What lessons can we take from “good” game designers that can be applied to instruction? In this case I think there are some parallels. A well-designed game would offer multimedia (text, audio and images) in a way that the player can process and make sense of while not detracting from game play. Similarly, instruction should be designed the same way. According to Mayer, textbook-based learning and direct instruction can be designed in such a way as to facilitate constructivist learning. This achieved by highlighting important text with varied fonts, bullets, etc. and by placing images and text together in such as way as to not only help the learner build bridges between the two but also to avoid an information overload. The Civilization series is designed in this way. Printed information on the screen comes in small chunks and is often closely associated with a visual.