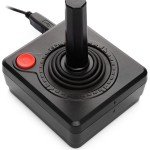 Over the past two years I’ve been approached by several people from around the world inquiring about our World of Warcraft in School Project.  Yet, despite the numerous contacts, I’m only aware of two other schools/school systems who’ve started similar projects.  Of course, there are many potential barriers from costs to people-barriers.  Craig Lawson (@midlawsondle) and I have worked over the past year to create a full-year, standards-aligned language arts course that is based on World of Warcraft.  We have several goals in doing so:

1.  We want to demonstrate that there is value in considering commercial, off-the-shelf games for curricular integration.

2.  We want to share our work with anyone else who might take it on, and in doing so, expand the network of educators who are exploring the potential that games like this hold for the classroom.

3.  We want to create a model (using the term loosely, here) upon which similar projects, perhaps using other games might be built.

4.  We hope that others will look at the work and expand on it, improve it, and share it.

Last Friday, we decided to kick it out of the nest.  It’s a work in progress and we sincerely welcome your feedback.  If you want to start something similar in your school, it contains most of what you need to get started.  For what’s missing, well, that’s where the power of networking comes into play.  Contact me, especially via Twitter (@PCSTech), and I’ll do my best to fill in the gaps.

If you’d like to download the .PDF of the curriculum, you can find it on the project wiki or preview it below:

I see the fact that I’m creating this post as a fantastic sign.  Why?  Because, it means that the idea of using games for learning is spreading and that people are moving from an “ideas” phase to a “let’s do this” phase.  Several people have asked me how we got started with WoWinSchool and if I have any suggestions.  From experience, here are some suggestions that are emerging: 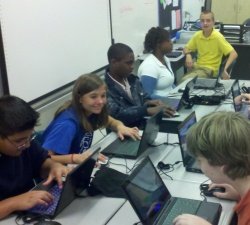 1.  Put the kids first. It’s all about them anyway. You really must have a heart for them and what’s good for them.  Recruit educators who believe this first, because they’re the most important factor, then, recruit your gamer teachers.  Let this first suggestion frame every decision made.  (A big thanks to Diane Lewis for nailing this one at her VWBPE presentation on the topic.)

2.  Find the principals who will support you, champion for you, and advocate for your kids and the awesome things they’ll be doing.  Find the ones who “get it.”  If you can’t find those, find “the willing to get it” crowd.  Involve your district leadership as well.  Not only do they need to know what you’re doing they can also be a huge resource.

3.  Recruit your IT folks.  You’re likely to need some special attention from them.  Bring them on board as partners with your project.  Praise them and market how awesome they are as they support your project.  (They too often are overlooked or get a bad rap for doing their jobs.)  They’ll need to know what impact any games will have on things like bandwidth,  your filter, etc.  You may have to gather that research for them because they’re probably very busy with other issues.  My IT people have been amazing and have really gone above and beyond (such as providing bandwidth impact graphs, and helping to set up a MineCraft server on our local network).

4.  Start as a club.  Starting as a club is a great way to begin.  Clubs are a safe place to fail and they’re typically voluntary.  After-school, before-school, or during a club period is a great time to for your kids to meet, play, and learn.

5.  Find your “at-risk” learners and “fringe” kids.  Really, most of our students are at a minimum, at-risk for extreme boredom, and many of our labeled “at-risk” learners are simply bored with school and don’t see relevance.  These students are ideal and usually need something engaging and relevant to anchor them in school.  We’ve also seen some incredible things with students who are identified ADD/ADHD and even the mildly autistic.  Let the kids “own” (or “pwn“) their learning.

6.  Read and share your reading.  Have some supporting research.  We’re building a list at http://wowinschool.pbworks.com/w/page/5268741/Supporting-Research.  Also consider having a few copies of Gee’s What Video Games Have to Teach Us About Learning and Literacy and Prensky’s Don’t Bother Me Mom — I’m Learning on hand to loan.

7.  Tie your project to one or more instructional goals.  Our primary charge is to foster learning, right?  It’s a big step for many to see video games as tools for learning so a clear alignment to instructional goals really helps.  This doesn’t have to be especially formal, particularly with a club format, but alignment to existing learning goals is a great idea.  Also, don’t neglect the opportunities that arise to address topics such as leadership, digital citizenship, and media literacy which are too often overlooked in our standard course of study.

8.  Get parents on board.  Communicate with them clearly and often about the project and your expectations, goals, and what will be involved.  Consider hosting a parent orientation event or informational videos that explain your project.

9.  Market your program.  Be transparent about everything, both success and failures.  Document everything because you’re a pioneer in an emerging area.  Market your learners’ work and connect them to a global audience.

10.  Invite visitors.  Even after you’re underway, many people still won’t understand what you’re doing.  Invite them to come see.  This not only broadens their understanding of the possibilities of game-based learning it’s another opportunity for your students to showcase what they know.

11.  Connect.  Connect and network with educators who are doing similar work.  Have them talk to your decision makers and district leadership.  Once your project is started, connect your kids with other kids!

These are some points that have helped make mine, Peggy Sheehy’s and Diane Lewis’ projects successful.  What would you add?  What have I left out?