Last week, I had the honor of spending four full days with a group of talented and highly-energetic middle schoolers during the the Surry County Schools annual STEM Camp.  My camp, in particular, was Game Design in Minecraft.  Throughout the week, using Minecraft as our platform, we worked through a design process to create an original game, built on a shared server. 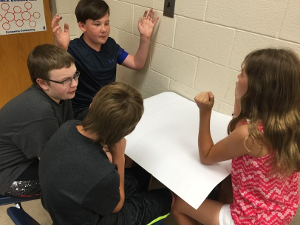 Students first formed a design studio, a group of three to four student designers.  They gave their studio a name and then created a slogan.  Some of my personal favorites were:

4RandomThings – “Sometimes, all you need are 4 Random Things to make 1 GREAT thing happen…”

All of the submissions were equally creative.

Develop Story and Map The Game

From there, teams were tasked with developing a title and some basic story elements they wished to include in their game.  One group’s theme revolved around surviving a zombie apocalypse, another tasked you with finding a lost pig.  Once again, Minecraft’s flexibility really enabled students to unleash their imaginations and creativity.  Following this step, teams mapped out their overall design plans, labelling traps, puzzles, landscaping elements, and other challenges.  At this point, teams pitched their ideas to me for feedback.  Much of this dealt with the technical possibilities and limitations of MinecraftEDU.  After approval, teams logged into our shared server, selected a site for their game, marked off the borders with colored wool and signs and began building.  By far, this step was the most time consuming and most enjoyed by the student-designers. 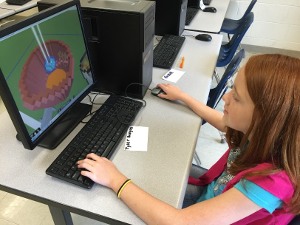 As the part of the camp neared, we moved into a play-testing phase.  First, each team play-tested their own game, thinking critically about what was working and what needed to be changed.  A snapshot of the server was saved (to preserve traps and such), and studios played the games designed by their fellow designers.  They provided constructive, written feedback to the creators of the game they played and then we moved into an iteration/polish phase.  We spent some extra time discussing how to give and receive feedback.  “Feedback is a gift!”

The week concluded with a live walkthrough of the game facilitated by each team and ultimately a ceremony to distribute an official (physical) badge for their work with certificates.  Our last treat was a live chat with game developers at 1st Playable Productions.  The 1st Playable team shared their path leading to careers in game design, games they’ve worked on, and challenges they faced along the way.  Our student designers asked incredible questions along the way. 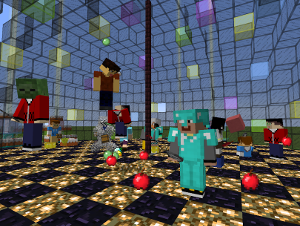 I’m really looking forward to building on this first year prepping for next year’s camp.