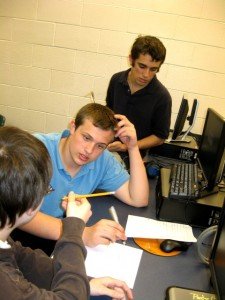 Students are prepping the day before the VWBPE Tour

I’ve always been told that ownership is a powerful tool in student learning, and I have always believed it.  However, the experiences and observations of the past two days have truly validated that assertion.  Today, our incredible (and I don’t use that word lightly) students in the WoWinSchool Project led a small group of educators from around the world on a virtual tour of World of Warcraft as part of the Virtual Worlds Best Practices in Education Online Conference.

I was approached about a month ago by conference organizers asking if I would like to host a virtual tour.  When I asked if I could have our students lead it instead, they graciously (and courageously?) accepted, and the Know Your Gnomes session was set.  I’m not sure our students fully grasped the implications until yesterday afternoon.  (Perhaps some of the best learning happens in the 11th hour?)  I asked them how they’d like to organize the tour and they decided forming two groups would be best, and probably the most comfortable for them.  They then began to organize themselves based on who felt most comfortable leading a discussion on what topics within those groups.  One would take quests, another would cover movement and navigation, while another would talk about communication and so on.

That’s when I sensed a bit of stress among them.  When it hit them that they would be talking to complete strangers from other countries about this program, they very quickly went from silliness to seriousness.  In fact, in my 10+ years as an educator, I’ve never seen such an abrupt transformation among students.  In their minds I think they were beginning to take ownership of the idea and realizing that they, in fact, would be the experts teaching the teachers.  It was incredibly powerful. 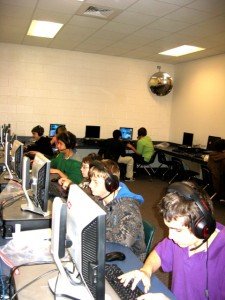 The VWBPE tour is underway and the kids have their "game-faces" on.

When I asked them if they’d like to do a trial run, they hastily agreed that it would be a good idea.  It was at this point, I think, that they began to rationalize what would actually take place during the tour.  The “what if” questions began gushing out.  “What if they don’t understand English?”  “What if they can’t get into Ventrilo?”  “What if I misspell something?”  I worked to put their concerns and questions to rest, honestly, not knowing the answers to many, and encouraged them to have some faith in themselves.  At this point they really put their “game faces on.” (Pardon the pun!)

This morning, they literally rushed to the lab and quickly began to help get set up.  Some logged in right away and began greeting the early comers to the session.  I can’t begin to tell you how suddenly professional kids, who are just ask likely to yell “Your Momma!” across the room, become when things got started.  We had participants from as far away as Israel!  It’s at this point that I should probably offer up an apology to the participants from VWBPE.  Your experience in this tour may have been good, but I know it was nothing compared to what I saw taking place.  The real magic was taking place in the lab at the school and I really wish you could have seen it.

You see, ownership is an incredibly powerful tool in student learning.  Teachers, your kids will amaze you if you tap into it, I promise.  I’d also argue that never before have so many opportunities existed for classroom teachers to really share with the world what their students are creating.  “Creative capital” is something that every child has and it behooves us as educators to tap into it, because in our ever-changing global economy, that’s where they’ll one day shine. 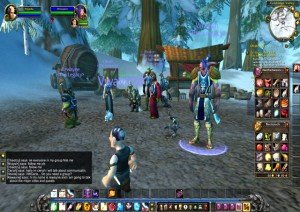 Students have split into groups are sharing with VWBPE attendees.

There are so many tools out there for classroom teachers to use, too.  Have the Skype chat to show off their work.  Have them create a wiki and share their creations.  Publish a book of their writing!  Trust me, show your students that the world is watching, and step back and watch them perform.  They’ll PWN the learning!