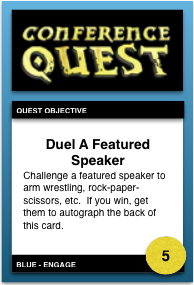 I love the idea of finding excuses to force social interactions, especially when it comes to helping people grow professionally.  Inspired by reading Reality Is Broken by Jane McGonigal and games like Sneaky Cards, I decided to come up with a little game to encourage district educators to interact both with each other and with strangers at an upcoming conference.

In the past, I’ve challenged colleagues to a simple game I called Pen Quest.  The goal?  Get the most pens (or other writing tools) from vendors at a conference.  The winner then receives a fraction of the other player’s collection.  But, conferences are so much more than vendor swag!  How do I encourage a fun, friendly competition among colleagues that will also, potentially have positive impacts on other conference attendees? 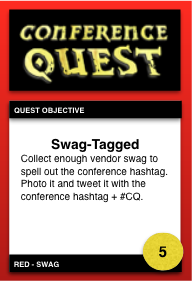 Conference Quest!  (Or Con-Quest if you like!)  The idea is pretty simple.  Download and print a set of cards.  These cards give you a variety of quests to get you to engage even deeper at the conference.  All of the cards require evidence of completion.  Typically, this is a signature on the back or a Tweet that includes the conference hashtag and #CQ (for ConferenceQuest).  Each player gets (prints) a set of their own.  With two ore more players, agree upon a start and stop time for the game (to be played throughout the conference).  You may play in teams or solo or both.  It’s up to the group to decide those rules.  Agree on a win condition.  Each card has a suggested point value for completing the quest in the lower right, so that’s the easiest option.  Agree on a prize for the winner.  It could be bragging rights, a badge, or for the materially-minded, a fraction of the conference swag collected by all the players (part of some of the quests). 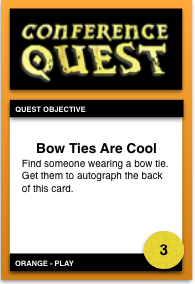 Can your group help the conference hashtag trend on Twitter?  Will you recruit unknowing conference attendees to play along?  The possibilities are endless!

Download the PDF below to print your own set!

Quest Cards!  The response to the first round of Conference Quest at #NCTIES15 was hugely positive even with a relatively small group of players.  Many have asked me if they could modify the game to use with their students or staff during professional development.  Absolutely!  To help make that a bit easier, I’ve made a more generic version of the cards available.  I simply call them Quest Cards.  They’re a simply way to add some game-like elements to non-gaming situations (gamification).  I’m including three options for you to edit:  a Pages file, a PDF, and a single card as an image.  I tried to create a Word version, but simply didn’t have the time to get the formatting right.

One Response to “Conference Quest/Quest Cards!”