Did you know that Google would allow you to view readability-filtered search results?  I was tipped off to this hidden feature by Alicia Taylor, a district media coordinator, who sent me the Huffington Post article on the feature.  To use this feature, simply conduct a Google search, then on the left side of your results, click “More SearchTools” and select “Reading level.”  The results of your searches can then be filtered by basic, intermediate, or advanced.  So, I compiled a small sampling of results (% of results at each level), mostly games and a few other topics and put them in a table.  Interesting results: 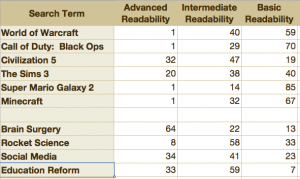 The interest in the WoWinSchool Project continues to grow!  Next week we’ll be presenting the project and student work at North Carolina Technology In Education Society (NCTIES).  The following week our students will be serving as virtual tour leaders for the Virtual Worlds Best Practices in Education (VWBPE) Online Conference called Know Your Gnomes.  During the first week in April we’ve been invited to present for the North Carolina Distance Learning Association’s (NCDLA) annual conference.  In June, Peggy Sheehy and I will be leading a hands-on session for educators as part of the Games, Learning, and Society (GLS Educator Symposium) annual conference.

Here’s the presentation I’ll be using NCTIES next week, Learning With The Lich King 2.0:

Back in the Fall or 2008, three classes of students at Cape Fear Middle School, the district where I work as an instructional technology coordinator,  participated in a course called Virtual Math.  In this course, we used an immersive, 3-D video game,  Tabula Digita’s Dimension-M, to see if it enhanced students’ learning of pre-Algebra concepts.  The course was a great success.  We have since expanded the course to West Pender Middle and Topsail High.

Starting in January, UNCW has launched a study at both West Pender Middle and Cape Fear Middle to take a closer, more scientific look at the impact this game is having on students’ performance in mathematics.

This story has now been picked up, not only by our local Fox/NBC affiliate (which has a great video of the students), but has now been reported by a number of online websites as well:

Look for more news in the future as the results are published!

Brandon Sheffield, writer for Gamasutra, covered Jane McGonigal’s talk at the Game Developer’s Conference, which is going on this week.  In her talk, Ms. McGonigal made some very poignant remarks about the nature of massively multiplayer online games (MMO’s), why they’re so successful, and how there’s true potential in the medium.  Of course, her remarks have some powerful implications for educational gaming:

Positive psychology is coming to the conclusion that multiplayer games are the ultimate sustainer of happiness.

This observation is based on her research that MMO’s replicate what she feels humans crave:  satisfying work, the experience of being good at something, spending time with people we like, and being part of something bigger than ourselves.

She goes on to suggest that virtual game worlds provide a space that fosters collaboration.  Based on the estimated time it took to create Wikipedia (~100 million mental hours), she says that the collective time and efforts of World of Warcraft players could create it in five days.  She then goes on to make a statement that, could easily be applied to education in these sorts of environments:

There’s no reason why we can’t take real world work and real world problems and seductively conceal it in a game world. Gamers have no problem doing work and doing collaborative things, you just have to figure out how to make them care about it.

In my view, that’s one of the key potentials of serious games, especially virtual worlds.  They provide a context and environment in which students work together toward a shared goal.  The challenge of what she mentions will be providing quality instruction and learning goals that are meaningful to the learners while not being particularly overt about it.

Well, the dust has finally settled.  I’ve wrapped up my graduate studies (Woot!) and have completed my thesis.  The middle school students and staff I worked with in my study were absolutely awesome.  The kids never ceased to amaze me at how they approached the game’s challenges and how quickly they adapt to the first-person game environment.  I’m also very excited that this study has served as a catalyst for advancing other game-oriented instruction in my district.  As of this posting at least three other schools are looking into Dimension-M as a tool for math instruction and remediation and other teachers/administrators are warming to the idea of using games for instruction.  I love my job!

Oh yeah… Here’s the link to the thesis.  It’s also linked on the right of the site.

It looks as though Appalachian State University here in Western N.C. received over $400,000 to research middle schoolers and their learning in a virtual world setting.  The researchers and students will be using the Qwaq environment.  Sounds promising!

I took my last thesis revision and put it into Wordle. It creates a very interesting representation and gives you a good idea what was studied.  Have you heard of Wordle?  Wordle analyzes any text that you copy and paste or a website with RSS feed to produce a representation of the words used.  Words used more frequently are larger.  You can then select your colors, fonts, and the orientation of the words. To date, I haven’t spent a great deal of time discussing my thesis research, because it has been an ever-changing work in progress.  Without anything “final” I didn’t want to throw anything out into the blogosphere.  However, I’m very close to finalizing it and will be sharing my work here soon.

To provide some background, I used Tabula Digita’s Dimension-M game with middle school students to see the game’s impact on their mathematics achievement and attitude.  In addition, I wanted to see if gender played any role in the outcomes.

Though the group I was working with was small and the period of the study was short, the results were very interesting.  I’ll be sharing those results here once the thesis is finalized!

Constance Steinkhueler and Sean Duncan found some interesting results in their researcb that used World of Warcraft with boys in an after school program.  Read more about it at: